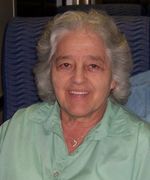 Orlene C. (LaCourse) Wadsworth 86 yrs, passed away at home on August 22nd, 2020 surrounded by her family. She now awaits for the sound of the trumpet of her Lord and Saviour and will arise in the Resurrection at the last day when our Lord Jesus returns.

Mom was born in Hollis, Maine on July 27th, 1934 the daughter of Edward F. LaCourse and Annie A. (Leavitt) LaCourse. On August 28th, 1955 she married Malcolm Wadsworth of Appleton and they settled in their home in Union. Mom worked at Hillcrest poultry in Union in the 1950’s, Tibbett’s Industries in Camden, Rockland Sardine plants as well as a number of local boarding homes before working most of her life as a care giver in her home until her last boarder passed away on February 28th, 2020. She did a wonderful job at balancing her boarding home in one part of her home while raising her family in the other part of her home.

Everyone enjoyed Mom’s home cooking, especially her homemade stuffing, apple pie, apple cake and coffee bars. She had a big heart and was more willing to give than to receive.

Our family would like to thank Dr. Rodney Mayhorn and his team as well as Nurse Karen Jackson for all of their warm and caring support.

Brother Clayton Wadsworth will be officiating the graveside service at the Pine Grove Cemetery in Appleton on August 26th, 2020 at 1 o’clock.

Hall’s of Waldoboro has care of the arrangements.

All rights reserved. This obituary is also archived at obittree.com