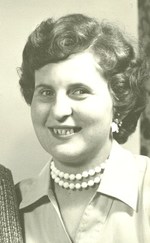 Mary began her working career at the age of 14 washing glasses and silverware at the hotel Fullerton with her mother who at the time was making all of the pies for the hotel. Mary worked her way up and eventually became a waitress. Mary later would hold jobs with companies like Robins, The A & P, First National Store, The Fruit Store, West Harbor Cash Market, and nine years at Fisherman’s Wharf as a chambermaid. Her favorite job, which also was her last, was a dietary aide at St. Andrew’s Hospital.

Mary being on of 7 kids always enjoyed spending time with her siblings whether they were making magical memories as children or retelling those stories as adults she enjoyed spending the time with her family.
Mary was a graduate of Boothbay Harbor High school with the class of 1947. It was here she met her first husband William Day. They had two children together John and Ruth. Mary loved country music and dancing, and she loved watching her soaps on the television.

Later after William’s passing she married Charles Hull. They loved to travel together and every October would take the camper to New Hampshire and Vermont until they were no longer able to haul the camper.

A private service will be held at Evergreen Cemetery

All rights reserved. This obituary is also archived at obittree.com