To share your memory on the wall of Betsy Cunningham, sign in using one of the following options:

Provide comfort for the family of Betsy Cunningham with a meaningful gesture of sympathy.

Betsy was born to Marion Bryant and Muriel Light Bryant on November 21, 1935 at home in Nobleboro, along with three sisters. Betsy attended school in a one room school house in Nobleboro with all 8 grades, along with teacher Alice Spear. She then attended Waldoboro High School in Waldoboro, Maine.

Betsy went to work at GTE Sylvania in Waldoboro in 1963 and worked there for 31 years retiring in 1994. Betsy then started taking care of her two grandchildren Craig and Samantha Jackson, then other parents wanted her as a baby sitter, so over the next 15 years she took care of over 50 different children.

Betsy spent time in the winter braiding rugs and in the summer mowing the lawn with her tractor. She helped raking blueberries in the summer and spending time on Crawford Lake. She loved to cook for her family, making fudge (peanut butter), cookies and her famous lemon meringue pie.

There will be no visiting hours as Betsy will be cremated and buried in the Lake View Cemetery in the spring.

Donations may be made in Betsy’s name to the Waldoboro Food Pantry, 251 Jefferson Street, Waldoboro, ME 04572, which she supported or the Sussman House, c/o Pen Bay Waldo Healthcare Foundation, 22 White Street, Rockland, ME 04841.

Hall’s of Waldoboro has care of the arrangements. To extend online condolences visit www.hallfuneralhomes.com.
Read Less

Print
There will be no visiting hours as Betsy will be cremated and buried in the Lake View Cemetery in the spring.

We encourage you to share your most beloved memories of Betsy here, so that the family and other loved ones can always see it. You can upload cherished photographs, or share your favorite stories, and can even comment on those shared by others.

Posted Nov 14, 2019 at 02:58pm
Sorry to hear about Betsy. My thoughts and prayers are with Carl and his families and friends. I always liked talking to her.
Comment Share
Share via:
KW

Posted Nov 13, 2019 at 09:48am
How my girls loved her! She got such a hoot out of Kelsey being able to scoot up and down those stairs to the play area at a very very young age....Thank you for sharing her with so many.. 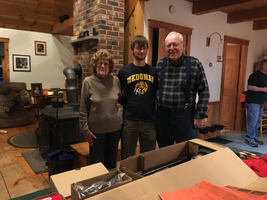