To share your memory on the wall of Carolyn Brown, sign in using one of the following options:

Provide comfort for the family of Carolyn Brown with a meaningful gesture of sympathy.

Carolyn attended high school initially in the public school system in Williamsburg, Massachusetts before enrolling in the Northampton School for Girls (now the Williston Northampton School), from which she graduated in 1964. She attended the University of Maine at Orono, earning a B.A. in 1968 and an MLS in 1974. One unique feature of Carolyn’s life is that she had a single job interview in 1968, which launched a 46-year career as an academic librarian at the University of Southern Maine (USM) in Portland. She left the University in 2014 as Head of Acquisitions and Serials Services in the library.

She married William B. Hughes in 1982; he died in 1992. She began a long-term relationship with Scott W. Brown in the mid-1990s; they married in 2014. Their wedding has the distinction of (probably) being the only one to have ever taken place at the USM library. Carolyn and Scott did everything together, ranging from activities that were mundane (going to the store or Post Office) to strenuous (hiking, building walking trails, renovating a barn) to just plain fun (cooking, road trips in their red antique Corvette convertible).

Carolyn was an exceptionally warm, kind, friendly, and generous person who was always willing to pitch in and help. Many describe her as one of the nicest people they had ever met. She loved cooking, as evidenced by her 500+ cookbook collection. She especially loved cats, and owned many over the years. She loved them all, but her favorite was a one-eyed stray female from a shelter that Scott named MQ (for Monocular Quadruped). MQ was smart, loving, and feisty, just like her owner.

Carolyn’s maternal ancestors were centered in New York and New Jersey, and tended to be educated professionals. In contrast, her paternal ancestors were DownEasters from Machiasport, Maine and they went to sea. Her forebears include numerous sea captains, mariners, and sailors of ships both large and small. Her father and an uncle were crew members on Howard Hughes’ yacht “The Southern Cross” in the 1930s. Another uncle served on Atlantic convoy ships in World War II. Carolyn and Scott have spent many enjoyable times at the family salt water farm in Machiasport, built by a sea captain ancestor in 1841. One particularly interesting marine artifact at the farm is the log book of a great grandfather who operated the schooner “Saarbruck” in the 1870s. The “Saarbruck” shipped cargo between Machiasport, New York, and Rio de Janeiro.

Carolyn is survived by her husband Scott of Union and Machiasport, Maine, adopted stepchildren Donna L. Boyle of South Portland and William D. Hughes of Westbrook along with their families, and a cousin Dawn Woodbrey of Orono and her family. A life-long friend is Judy Carloni of Shapleigh, Maine and Englewood, Florida, who Carolyn met when they were both age 3; they remained friends for the next 70 years.

According to her wishes, Carolyn will be buried in the East Union, Maine cemetery alongside Scott’s relatives. A gathering of friends and family to celebrate her life will be held in both Union and Machiasport in the spring. Carolyn would wish that any donations made should be directed to a local animal shelter, especially to provide support for stray cats.

Print
According to her wishes, Carolyn will be buried in the East Union, Maine cemetery alongside Scott’s relatives. A gathering of friends and family to celebrate her life will be held in both Union and Machiasport in the spring.

We encourage you to share your most beloved memories of Carolyn here, so that the family and other loved ones can always see it. You can upload cherished photographs, or share your favorite stories, and can even comment on those shared by others.

Posted Nov 04, 2019 at 04:10pm
I met Carolyn when we were 3 years old and we became best friends from that point on. My fondest memories of her were the times we spent together in Machiasport, Maine. We searched for arrowheads carved in the rocks, threw coins in the wishing well, played games with our friend, Chip, in the Boat Room, and explored Clark's Point from dawn until dusk. Our first stop on our way back to Williamsburg, MA at the end of summer was to Uncle Mel's store. We would stock up on French horns, our favorite, for the long ride home. As we grew older we continued to stay in touch. We met for lunch at least once every year and would always call each other on our birthdays. Carolyn called me this year in September on my birthday and made a point to remind me that we had known each other for 70 years. Carolyn was such a kind, caring, and loyal friend and I will miss her very much. My sympathies go out to her two step children, Donna and Bill, and her devoted husband, Scott, who was by her side until the end. Rest in peace my dear friend. Judy Graves Carloni
Comment Share
Share via: 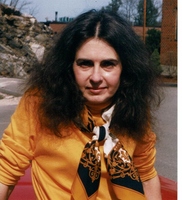