In Memory of
Irene Anne ""Renie""
Vinal (Penney)
1932 - 2018
Click above to light a memorial candle.
Memorial Candle Tribute From
Hall's of Waldoboro
"We are honored to provide this Book of Memories to the family."
View full message >>>
Send Flowers
Menu

In the event that there is an error
in the information presented,
please contact the funeral
home by clicking here. 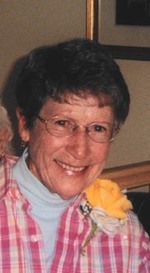 Irene (Renie) Anne Penney Vinal, 86, passed away peacefully August 24 th at the Sussman House in Rockport. She was born January 5, 1932 in Lancaster, New Hampshire to Arthur James Penney and Margaret Elisabeth Delorey Penney. She attended schools in Lancaster, N.H. until her family moved to Warren. She graduated from Warren High School in 1949.

Irene married Edward William Vinal in 1954. They lived in Thomaston and later moved to Cushing in 1962.
Irene worked at the Warren Woolen Mill, G.T.E. Sylvania in Waldoboro, Crowe Rope in Warren, and as the tax collector for the town of Cushing. In early years

she and her husband Eddie Bill enjoyed boating, motorcycling, and spending time at the shore with family.
Irene loved serving the people of Cushing as tax collector, and did so, for over 43
years. When she wasn’t working, she was busy mowing her lawn, gardening and
maintaining her home which she took great pride in.

She was predeceased by her brothers, Russell A. Penney, Charles Penney, and her
sisters, Bertha Henderson, and Margaret Chadwick.
She is survived by her brother, Arthur James, Jr., of TX; her two sisters, Marjorie
Martin of Damariscotta, and Monica Moore of Edgecomb; and many nieces and
nephews.

A graveside service to celebrate Irene’s life will be held Friday, September 7 th at
4:00 p.m. at the Village Cemetery, Erin Street, Thomaston.

In lieu of flowers, contributions in Irene’s memory may be made to The Friends of Cushing Rescue,
P.O. Box 20, Cushing, ME 04563.

Arrangements are entrusted to Hall Funeral Home and Cremation Service, 78 Main Street, Thomaston.
Condolences may be shared with the family at www.hallfuneralhomes.com