In the event that there is an error
in the information presented,
please contact the funeral
home by clicking here. 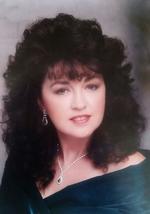 Bonnie Potter Vannah passed away Sunday, May 22, 2016, with her loving husband Gary and her family by her side. Bonnie was born May 15, 1961, and raised in Palermo, Maine, daughter of Ramona "Mona" Bessey Potter and Richard "Dick" Lawrence Potter, along with her two brothers, Richard and Bryan.

She attended schools in Palermo and graduated from Erskine Academy in 1978. She fondly recalled the many escapades with childhood and high school friends. Bonnie worked as an administrative assistant for many years at South China Plumbing & Heating, Allied Architects & Engineers, Maine Yankee and Maine General, and has remained close friends with many former colleagues.

Bonnie married Gary on Valentine's Day in 1998. They later made their home in Jefferson, Maine, where family and friends were always welcome. They were members of the Jefferson Snow Packers Club and Bonnie enjoyed volunteering her time to assist with their events. She also loved riding with Gary on their Harley, their many camping adventures, and spending time with their family and friends.

Bonnie was devoted to her pups, Maggie and Katie, and loved them dearly, along with the many pups she raised with Gary over the years. She enjoyed camping with family and friends, she was a gracious host of family gatherings, a wonderful cook, enjoyed photography, computer games, was a movie buff and a music aficionado - especially the classics!

Visiting hours are Thursday, May 26th from 5-7 p.m. and funeral services will be held Friday, May 27th at 1 p.m., both will be held at Hall Funeral Home in Waldoboro. There will be a graveside service for family following the funeral.

In lieu of flowers, donations can be made in Bonnie's memory to the Lincoln County Humane Society, 27 Atlantic Highway, Edgecomb ME 04556.

Hall’s of Waldoboro has care of the arrangements. To extend online condolences, light a candle in Bonnie’s memory, or to share a story or picture, please visit her Book of Memories at www.hallfuneralhomes.com